Herb gardens are familiar to many herbalists. However, herb gardens should also be understood by aromatherapists as many essential oils are derived from herbs. Herb gardens have been traditional for centuries and are enjoying a revival, of sorts, among homesteaders, and modern day plant folk. Here’s a quick look at aromatic and medicinal herb gardens for the aromatherapist.

Historic Use of the Word Herb

Although herbs have been used for many centuries, a plant which was commonly classed as an herb in the past may not be known as an herb today; suprisingly, flowers such as roses, irises, and peonies were previously known as herbs. In addition, carrots and onions were known as pot herbs in sixteenth century England and many aromatic plants were grown for household use.

Today, the term herb is more commonly used to describe plants such as dill, parsley, and coriander. The botanic description for herb, as defined in the Concise Oxford Dictionary 10th Edition (1999: Oxford University Press, UK) is:

The modern history of scented gardens shows that it was medieval cloister gardens of the monasteries which began a practice of growing herbs for medicinal, culinary, and aromatic purposes. Gardens were split into the physic (or medicinal herb) garden, and the kitchen herb garden. Well known English physic gardens today, which were amongst the first physic gardens to be established, are the Oxford Physic Garden (1621) and Chelsea Physic Garden (1673).

Physic gardens were designed with a number of raised garden beds, with cross-sections of paths; medicinal herbs included lavender, rosemary, sage, rue and mint. Many physic gardens of the Middle Ages were influenced by astrology until the theory of science became popular in the eighteenth century. Today, medicinal herb garden plants include chamomile, sage, fennel, mint, lemon balm, verbena and lime flowers; physic garden plants are often used to make herbal teas or digestive tisanes, a popular tool for herbalists.

In the Middle Ages, herbs often had the dual purpose of being used for medicinal purposes and for fragrant aromas, used to disguise the many unpleasant smells of poor sanitization and personal hygiene. Queen Elizabeth I of England (1533 – 1603) used the herb meadowsweet on the palace floors; in the churches and houses of the wealthy, herbs of lavender, hyssop, chamomile, and sage were strewn on floors, releasing a fragrant aroma when walked upon.

Today, an aromatic herb garden is combined with the medicinal herb garden of the past because many herbs are grown for their aroma and medicinal value (whether that be as an essential oil, hydrosol, tea, or infused oil).

If you would like to learn more about the study of aromatherapy and the plants used in aromatherapy, consider the Sedona Aromatherapie Linguistics of AromaticsTM program! 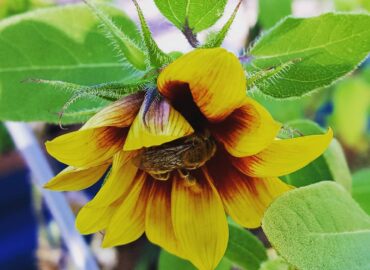 An Introduction to Sunflower (Helianthus annuus)

Planting an Aromatic Garden: One Pot at a Time 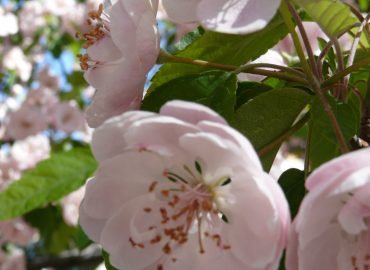