Last week, I wrote about my upcoming aromatherapy study trip to France in the summer and, as a lead up to that trip, I thought that I would write a mini-series of blog posts on France and related aromatherapy-type subjects!  Although I expect to share many photos and various pieces of information on my return, an appreciation of a la France before I depart wouldn’t go amiss!  So in the next few weeks, enjoy my weekly Friday posts on “French aromatherapy!”

Let’s start with a look at Grasse and both the flowers and the perfume industry to be found there:

Grasse is situated in the south of France with an ideal Mediterranean climate. The climate, and geography of the region, make Grasse one of the most suitable places in the world for growing many fragrant plants that are used in perfumes. Today, Grasse is described as “the perfume capital of the world.”

Grasse has a Mediterranean climate that is characterized by warm, dry summers and mild, wet winters. As there are usually no extreme variables in the temperature range, many scented plants and flowers survive. The geographical layout of the region of coastal and mountainous areas also provides various altitudes and growing habitats for scented plants; for example true lavender is grown at an altitude of approximately 2,000 feet whereas a scented herb, such as rosemary, is found in coastal areas.

Perfume Making in Grasse in History

France has used scented plants for centuries. Catherine de Medici (1519 – 1589), wife of King Henry II of France, is accredited with bringing Grasse into the world of perfumery. Catherine de Medici saw the potential of using the many fragrant flowers found growing in the Provence region of France in perfumes, instead of importing the traditional exotic perfumes that were popular at that time.

Although Grasse was famous for its tanneries during this period of history, the art of perfumery making eventually became the dominant trade by the 18th century, a tradition which continues today. Marie Antoinette of France (1755 – 1793), another French queen, often had her perfumer Jean-Louis Fargeon make up perfumes for both medicinal and aromatic purposes too.

Flowers for Perfume in Grasse

The region of Grasse has access to a large amount of scented flowers; although some Grasse perfume makers import their raw materials today, traditionally Grasse has used the following flowers to make French perfumes, some of which were introduced to the region from their native lands for the purpose of making perfume:

Traditional Use of Flowers for French Perfumes

Enfleurage was the traditional method of perfume making in Grasse. Depending upon the species of flower, flowers were hand picked at sunrise, throughout the day or at sunset. Flowers were then left to macerate in oils and animal fat over a number of days. Different species of flowers required different time frames in which to extract the “perfume” (essential oils) from the plant; time frames ranged from days to weeks. Enfleurage is a labor intensive method of plant extraction and is little used today because of this fact. 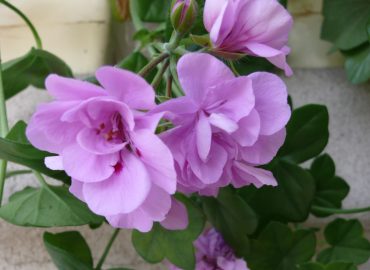 Pelargoniums and Geraniums for Aromatic Use